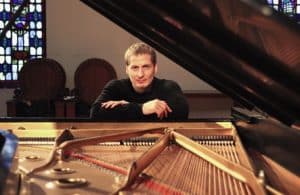 “Dazzling…golly can he play! I kept expecting smoke to emerge from the interior of the instrument…Flawless sense of Lisztian style incorporating its emotional depth…” (Heuwell Tircuit) San Francisco Classical Voice

“He is a master of intricate detail and can produce truly magical sounds.”
Monterey Peninsula Reviews

The Mercury News – It resonates: The year’s best classical
Dec. 28, 2005
By Richard Scheinin

The Bay Area is such a fertile oasis for classical music that squeezing the year’s concerts down to the 10 best was almost a joke of an exercise. But here they are.

I wish everyone who avoids or just hasn’t experienced this type of music could have heard what I heard: music that is surprising, beautiful, strange, tense, wild, challenging, emotionally evocative, entertaining and, at its best, transcendent. I’ve dipped back into my 2005 reviews for these highlights:

May: Musical rescue by Jason Klein and the Saratoga Symphony at St. Andrew’s Episcopal Church, Saratoga. Conductor Klein led his spirited community orchestra in the world premiere of Eric Zeisl’s Piano Concerto in C Major, a haunting, glinty and intensely melodic work completed 53 years ago and relegated to a dusty drawer in Los Angeles. A melancholy man who had fled the Nazis for California, Zeisl died suddenly in 1959, leaving behind a vast body of music, now largely forgotten. This performance was a historical corrective, with the composer’s daughter, Barbara Zeisl-Schoenberg, on hand, along with Zeisl’s biographer, Malcolm Cole, who supervised the score’s transcription. The remarkable piano soloist was Daniel Glover, a whirlwind and real champion of this marvelous and hitherto unknown music.

Reviews of Musical Events on the Monterey Peninsula
by Lyn Bronson, Editor

This past Sunday afternoon in the Music Hall at California State University Monterey Bay, genial host, pianist Daniel Glover, gave us a guided tour through a recital program he entitled “Music by Russian Romantics.” Mr. Glover talked almost as much as he played, and since some of the repertoire he was presenting was unfamiliar to most of his audience, his verbal remarks turned out to be useful, entertaining and informative. The afternoon’s program consisted of Three Pieces Op. 31 by Medtner, Tchaikowsky’s Grand Sonata Op. 37, Scriabin’sFourth Sonata, and four of the Six Moments Musicaux, Op. 16, by Rachmaninoff.

Mr. Glover gave us some excellent verbal program notes regarding the Tchaikowsky Sonata describing how Schumann had influenced Tchaikowsky in many instances. And, he played examples of passages from Schumann works that were similar to passages from the Tchaikowsky Sonata, except that, unfortunately, in each case the Schumann originals were obviously superior. Finally, after we heard Mr. Glover’s excellent and spirited performance of the Tchaikowsky Sonata, we couldn’t escape the conclusion that there is a very good reason why most pianists (except those building a theme program, of course) give this sonata a wide berth. Although the final two movements are very effective, the first two movements are not well written for the piano and are so extended that they overstay their welcome.

As an opener to the afternoon’s program Mr. Glover chose Three Pieces, Op. 31, by Nikolai Medtner. These three pieces received splendid performances by Mr. Glover, and in the second of the three, the Funeral March in B Minor, a work that deserves to be heard more often, Mr. Glover plumbed its depths to an extraordinary degree and demonstrated that he is a master of intricate detail and can produce truly magical sounds. The other two works in this set do not come up to the exalted standard of the Funeral March, and one wonders why not pair it with other better works by Medtner, such as the Danza Festiva, the Skazki, Op. 20, Nos. 1 & 2 or the Novelette, Op. 17.

After intermission, we heard the very brief Scriabin Fourth Sonata and this received a powerful performance, full of dramatic energy and exciting color. However, it was the Rachmaninoff group of four Moments Musicaux at the end of the program that provided the most satisfying music making of the afternoon. In these four pieces we heard a subtlety and refinement of tone that was totally winning. The two slower pieces, the Andantino in B-flat minor and the Andante cantabile in B minor were silkily seductive and made a lovely effect. Mr. Glover drew forth beautiful tone from the instrument and shaped his phrases in a totally natural and convincing manner. His ending work, the Presto in E minor, was masterful and powerful, and somehow he managed to make the thousands of notes he played in the left hand both musical and meaningful – no easy feat.

Mr. Glover told the audience that for several days prior to this concert he had been fighting an upper respiratory infection and had been uncertain whether he might have to cancel the event. Well, if this is the way he plays when he is ill, he certainly did himself proud. And, he rewarded the enthusiastic audience with three encores: The Lark by Glinka/Balakirev, Hopak by Mussorgsky/Rachmaninoff, and “The Flight of the Bumblebee” by Rimsky-Korsakov/Rachmaninoff.

A powerhouse of artistry and scholarship, his user-friendly programs are always exceptional and unique. “Glover’s performance was clear and dazzling, yet not showy. [His] impressive technique and reliable musicality…his dexterity and power were never in doubt…even in his blazing performance of # 4 and rousing conclusion of # 6 [Moment Musicaux].” “The elegance and civility of Glover’s approach was musically unimpeachable… Daniel Glover’s sensational cascade of octaves…displayed solid facility and technique to burn!”

……And then Klein blessed the music’s maiden voyage: “May this concerto have a long life,” he said, calling out the soloist, pianist Daniel Glover of San Francisco, who has a history of learning prodigiously difficult music in short amounts of time.

A youthful 47-year-old in a black tuxedo, Glover, smiling shyly, sat down at the piano and, following Klein’s downbeat, launched into Zeisl’s forgotten concerto. A dignified sadness Wow! Immediately, there was a wonderful tunefulness, a unison melody for strings and piano — and it was soaring, gorgeous, the piano part now shadowed, a little shakily, by one of the horns. Amid trumpet fanfares and flying violins — out of tune, but spirited, these string players — Glover, not shaky at all, rocketed through the big melodies, adorned with all sorts of opulent trills and tumbling flourishes, and broke out into massive cadenzas.

“This guy really plays,” Cole murmured after the lengthy first movement, which had been filled with sharply percussive dancing passages and ecstatically clanging chords in the keyboard’s upper regions. The glinty brilliance of the music, and its way of putting the piano in dialogue with the orchestra, was reminiscent of Bart??Its playfulness recalled Prokofiev. Clearly, Zeislhad his influences, but also, as Cole had been saying, his own voice: In the second movement, it was heard in the haunting tunefulness, the piano painting notes against a soft backdrop of teeming strings. In the third movement, the mood turned grave, spikier and more dissonant, with a whirling danse macabre and then a Semitic melody, dressed up like Rachmaninoff, but still expressing a dignified sadness.

The audience sat rapt as Glover, an incisive, exciting and apparently tireless player, drove the music toward its big chiming finish. Then the audience burst into applause. What an event! “Bravo!” shouted Zeisl-Schoenberg. Standing, she looked at Cole, seated next to her, and, with a big smile, said, “Well, that was a thrill.” “Oh,” answered the beaming Cole, obviously beside himself, “that was exciting.” “He’s terrific,” Zeisl-Schoenberg, still applauding, said of Glover. “He discovered the voice behind the notes,” Cole said, nodding. “They all did.”